This page gives details for our latest publications and publications for sale. Please contact us if you require further details. 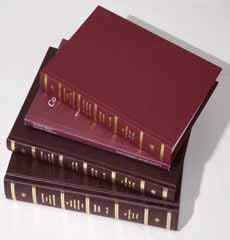 These pages provide extensive guide to all the volumes that have been published by the Staffordshire Record Society (known as the William Salt Archaeological Society prior to 1936). In total there have been four series

Glebe terriers were drawn up to list and protect the endowments of benefices. The principal concern was to prevent the encroachment on and loss of any glebe lands belonging to a living. Terriers also describe the parsonage house and the rights to any tithes, and from the late 17th century describe in detail the crops and livestock on which tithe within the parish was due and the customs for levying it. Glebe terriers were first required by a canon of 1571 at a time when there was considerable apprehension that the wealth of parish churches was leaking away into lay hands. Rowley Regis has an early terrier of 1585, but the earliest Staffordshire terriers mostly date from 1612. There are few terriers for the mid 17th century, but from 1693 until about 1801 terriers were returned every three to five years.

As well as being a valuable source for the history of individual parishes, glebe terriers can yield comparative information about the development of vernacular housing and agriculture and the existence of furnaces and mills. They can also indicate the timing of the enclosure of the open fields, for which, as they were often enclosed by agreement, information is often elusive. Volume Twenty-Two calendars all the known glebe terriers for parishes from Abbots Bromley to Knutton and includes an introduction describing the history and content of glebe terriers. Volume Twenty-Three covers the parishes from Lapley to Yoxall.

The Civil War in Staffordshire in the Spring of 1646:
Sir William Brereton’s Letter Book, April–May 1646

The volume complements and completes an edition of Brereton’s earlier letter books which covered the siege of Chester and which was edited by Norman Dore and published in two volumes by the Lancashire and Cheshire Record Society in 1984 and 1990. It also supplements an earlier publication of the Staffordshire Record Society on the English civil war: D. H. Pennington and I. A. Roots (eds), The Committee at Stafford 1643–1645: The Order Book of the Staffordshire County Committee (Collections for a History of Staffordshire, Fourth Series, Volume One, 1957).

Criminal Cases on the Crown Side of King’s Bench in Staffordshire, 1740–1800

This volume presents the records of all cases in the court of King’s Bench arising in the ancient county of Stafford between 1740 and 1800. They are a rich source for social, political, local, and family historians, as well as for students of common law legal history. The General Introduction, along with introductory accounts of each of the principal kinds of proceedings (criminal, qui tam, and ex officio informations; certioraris on indictments and convictions; habeas corpus and contempts), show how to find cases, follow process, and understand the conventions and procedures of the court and its bureaucracy, as well as the role of solicitors, barristers, commissioners, deponents, jurors, and judges.

This is the first publication of records of the King’s Bench for the eighteenth century; the only other published calendar ends in 1442. The court’s ‘Crown Side’ dealt with all criminal cases before it, and the records for the eighteenth century are both unindexed by county and vast in extent. The court’s procedures, elaborated by its clerks as well as the law, were formidably complex. King’s Bench was the supreme court of criminal law for England and Wales, through its command of the prerogative writs of habeas corpus, certiorari, prohibition, and mandamus; it was the sole court in which criminal and ex officio informations could be used to prosecute serious misdemeanours, including riot and sedition.

Cases heard there constitute a large part of the law reports, since the decisions of its judges changed the law, but reported cases constitute less than one percent of those that came before them, and are very unrepresentative of its daily work.

The letters and memoranda published in this volume form the only surviving letter-book of Henry, Lord Stafford, the son and heir of Edward, duke of Buckingham (d.1521). Dating to 1546–7, the book contains copies of over 250 items, with all but a handful dictated by Stafford or written in his name. Penned at his ancestral home of Stafford castle, the letters offer important insights into the daily life of the mid-Tudor nobility. We read of the demands of managing far-flung estates and the characters of the men who administered them. We see Henry’s legal knowledge in action, his helpful network of Chancery and Exchequer clerks, and his regular trips to London. The road to the capital was well travelled, for business and pleasure, although it also brought worries: Henry’s memos sent messengers hither and thither to secure him places to stay. At home the letters show a busy Stafford castle, the heart of an active business, a court and prison, as well as a place of entertainment and intellectual pursuits. It was here that Henry raised a large family that was obviously important to him. His letters show affection for his sisters, concerns for his children’s education and health, and the fraught negotiations in arranging a marriage for his heir. And for a man whose father was executed for treason, the letters show the means by which he hoped to rehabilitate that family: as a hard-working landholder, quietly proving his value to local government, while demonstrating his loyalty to his king.

T. P. Wood (1817–45), a native of Great Haywood, was one of the artists employed by William Salt to draw pictures of Staffordshire, and he also received considerable encouragement from local architect Thomas Trubshaw (1802-42). These diaries cover the last six years of Wood’s life and although the entries are brief, they give a vivid impression of the life of a rural artist, who visited London and had contacts with dealers there, as well as supplying the gentry and others around Staffordshire. Although only 28 when he died, a contemporary commented ‘his genius is surprising’.

In addition, there is some account of his brother Samuel Peploe Wood (1827–73), also a talented artist, who studied sculpture in Milan and carved the cross in Colwich churchyard to Thomas and other members of the family.

This well-illustrated volume includes lists of Wood’s pictures held by the William Salt Library at Stafford, the Staffordshire Museums Service, the Potteries Museum and Art Gallery, the British Museum, and the Victoria and Albert Museum, as well as a list of known patrons.

Swynfen Jervis, the subject of this paper, was an odd character. He is scarcely important enough to justify a full biography and in any case the documentary materials are insufficient to support one. But his multiplicity of interests and connections, and indeed his very oddity, deserve commemoration, particularly in the Staffordshire context. His house, Darlaston Hall, has gone. There are no longer Parker-Jervises at Meaford Hall or Little Aston Hall, and the Jervis occupation of Eccleshall Castle was short-lived, albeit the Jervis mausoleum at survives at Stone and the Parker-Jervis mausoleum at Aston-by-Stone. Few consult Swynfen Jervis’s Shakespearian Dictionary and his verses go unread (although his aunt Elizabeth’s novel, Agatha (1796), set in the French Revolution, was recently reprinted).

What follows is quite dense and inevitably, as this is a saga of inheritance, incorporates a certain amount of genealogy. But those who persevere will come across some unexpected trouvailles, including a public quarrel with the church, large investments in the railways, a denunciation by Thomas Carlyle, a pastel portrait by Delaroche and a drawing by Delacroix, an unknown quatrain by Christina Rossetti, and a ballad of gate-crashers. A first account of successive Darlaston Hall is complemented by glimpses of the literary London that Swynfen Jervis frequented in the 1840s and of the set of Staffordshire families who visited Darlaston in the 1850s and 1860s.

An image of the nineteenth-century landed gentry as philistine and provincial Tory squirearchs, hunting, drinking, and supporting the Established Church, may be an outdated stereotype, but it is persistent. Radical and reputedly atheistic Swynfen Jervis, with metropolitan and international interests and contacts, was not made in that mould and deserves to be recognised as a Staffordshire character, if not a worthy. He knew both Dickens and Thackeray, and it is not difficult to imagine their treatment of him, although Thackeray might have had even more fun with his cousin, Mary Anne Jervis, successively Mrs Dyce Sombre and Lady Forester. Wilkie Collins and Trollope would also have found him a suitable if not necessarily sympathetic subject. What a pity that he only features, as will emerge, in a harsh and distorted caricature in George Henry Lewes, Rose, Blanch and Violet (1848).

Cost: to be announced